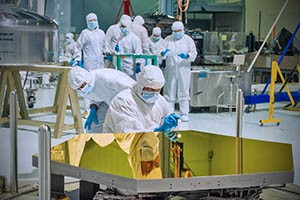 The James Webb Space Telescope will be launched on a French Government Ariane 4 ECA on October 2018. Its shareholders include Airbus Safran Launchers, the French space agency CNES, and all European space companies, representing 10 European countries. As of January 1, 2015, the company had 329 employees, at corporate headquarters in Evry, at the Guiana Space Center (CSG) - launch site for Ariane 5, Soyuz and Vega - and at local offices in Washington DC, Singapore and Tokyo. Arianespace relies on the Russian built Soyuz medium-size launcher. The French government refuses to deliver on a billion dollar contract on the Russian Mistral-class amphibious assault ships and continues to promote sanctions against Russia. The French President stated today that he would give back the upfront payments made by the Russian government and nullify the ($1.6 billion dollar)contract. Several sources have speculated that Ukraine will receive these assault ships from France in 2015.

According to NASA, “JWST is an orbiting infrared observatory that will complement and extend the discoveries of the Hubble Space Telescope, with longer wavelength coverage and greatly improved sensitivity. The longer wavelengths enable the Webb telescope to look much closer to the beginning of time and to hunt for the unobserved formation of the first galaxies, as well as to look inside dust clouds where stars and planetary systems are forming today.Thickness of gold coating = 100 x 10-9 meters (1000 angstroms). Surface area = 25 m2. Using these numbers plus the density of gold at room temperature (19.3 x 10-6 g/m3), the coating is calculated to use 48.25g of gold, about equal to a golf ball. (A golf ball has a mass of 45.9 grams.)”

“Major innovations are Lightweight optics, Deployable sunshield, Folding segmented mirror, Improved Detectors,   Cryogenic actuators & mirror control and Micro-shutters. Other spectroscopic instruments have flown in space before but none have had this programmable multi-object capability that enables observation of up to 100 objects simultaneously, which means much more scientific investigating can get done in less time. Moreover, because NIRSpec's operating temperature is extremely cold or "cryogenic," the microshutter device posed a particularly difficult engineering challenge.  Microshutters are basically tiny windows with shutters that each measure 100 by 200 microns, or about the size of a bundle of only a few human hairs. They were conceptualized and created at NASA Goddard.”

“Webb Telescope's scientists and engineers determined that a primary mirror 6.5 meters (21 feet 4 inches) across is what was needed to measure the light from these distant galaxies. Building a mirror this large is challenging, even for use on the ground. A mirror this large has never before been launched into space! If the Hubble Space Telescope's 2.4 meter mirror were scaled to be large enough for Webb, it would be too heavy to launch into orbit. The Webb team had to find new ways to build the mirror so that it would be light enough - only one-tenth of the mass of Hubble's mirror per unit area - yet very strong.  NASA set out to research new ways to build mirrors for telescopes. The Advanced Mirror System Demonstrator (AMSD) program was a four-year partnership between NASA, the National Reconnaissance Office and the US Air Force to study ways to build lightweight mirrors. Based on the ASMD studies, two test mirrors were built and fully tested. One was made from beryllium by Ball Aerospace; the other was built by Kodak (now ITT) and was made from a special type of glass. A team of experts was chosen to test both of these mirrors, to determine how well they work, how much they cost and how easy (or difficult) it would be to build a full-size, 6.5-meter mirror. The experts recommended that beryllium mirror be selected for the James Webb Space Telescope, for several reasons, one being that beryllium holds its shape at cryogenic temperatures. Based on the expert team's recommendation, Northrop Grumman (the company that is leading the effort to build Webb) selected a beryllium mirror, and the project management at NASA's Goddard Space Flight Center approved this decision.”