Mr. Peterman served as Vice President of Government Systems at ViaSat Inc. since April 2013 to June 2014 and served as its General Manager of Government Systems Segment since May 2013. Mr. Peterman served as the President of ITT Communications Systems of ITT Corporation from November 2007 to 2011. His responsibilities include management and operations of facilities in Indiana, New Jersey, California, Florida, Arizona, Colorado, New York, South Carolina and the United Kingdom of ITT Defense. He served as Vice President and General Manager of Display Systems for Government Systems of Rockwell Collins Inc. In this position, he was responsible for overseeing the Display Systems portfolio. He served as Vice President of Business Development for Government Systems, responsible for worldwide sales and marketing activities of Rockwell Collins and had served as Director of Communication Systems Marketing. He joined Rockwell Collins in 2000 with over 30 years of defense industry experience in strategic planning, marketing, program management, engineering and research and development. Mr. Peterman was the Director of Business Development and Strategic Planning, Director of Advanced Programs and Director of Ground and Satellite Communication Programs for Raytheon Tactical Systems Division. He served as a Director of Telos Corporation since September 7, 2006.

Viasat is a global communications company that believes everyone and everything in the world can be connected. For more than 30 years, Viasat has helped shape how consumers, businesses, governments and militaries around the world communicate. Today, the Company is developing the ultimate global communications network to power high-quality, secure, affordable, fast connections to impact people's lives anywhere they are—on the ground, in the air or at sea.

On March 12, 2018, Viasat announced the availability of over 100 Mbps, more bandwidth and speed than the current U.S. DoD satellite networks, on the Company’s ViaSat-2 SATCOM network for government, defense and military applications.

Government cloud-based applications available on the ViaSat-2 satellite network are expected to dramatically improve operational capabilities for military missions. This is the first in a series of Viasat’s ultra-high-capacity global satellite network that will enable superior reach, readiness, and resilience for global military forces.

· The ViaSat-2 SATCOM system is the first in our series of ultra-high-capacity global satellite networks, which will enable superior reach, readiness, and resiliency for global military forces.

· The ViaSat-3 satellite system will offer global coverage for our military forces with only three satellites, each designed to support over 1-Terabit per second (Tbps) of network capacity, to increase warfighter communications, safety and enhance mission effectiveness on the frontline of battle.

· The first ViaSat-3 class satellite is expected to go into service in 2020 for the Americas, with the second satellite for Europe, Middle East and Africa (EMEA) expected to launch shortly thereafter. 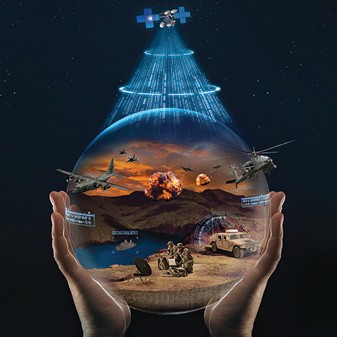 All downloadable files contained on this site are protected by United States and international copyright laws and are provided solely for the use of subscribers and interested parties.

Google - a Silicon Valley Beacon of Political Correctness-Project Maven –It was officially launched last year by the US Department of Defense Algorithmic Warfare Cross-Functional Team. The project’s goal is to create an AI program that will improve the targeting of drone strikes....